The past seven days have seen a lot of firsts for us as a family. Or more precisely for Caspian, with Daddy Long Legs and myself as intrigued observers. His first two teeth popped out to say hello. He had his first taste of real food as we took baby steps on the winding road to weaning. We saw him take his first full bottle of expressed milk. And today he did his first unassisted roll, looking incredibly proud as he lifted his head and held it high like a tiny turtle. 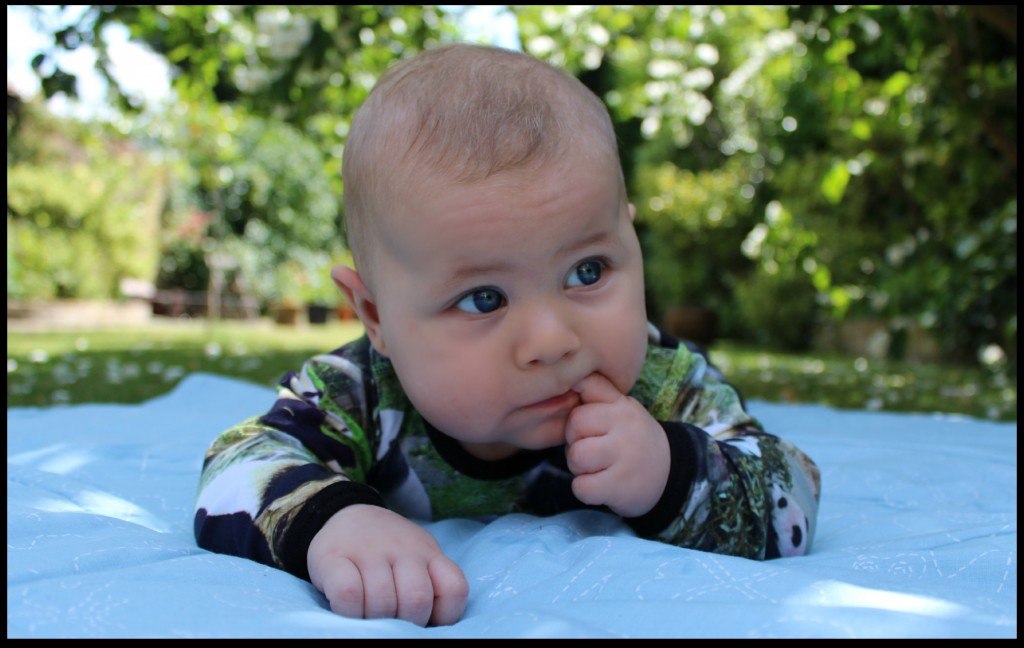 Caspian’s been on fire this week. And we as parents became even more aware of just how quickly our little boy is growing up and developing. It is therefore clear to us just how important it is to enjoy every moment.

Our baby boy’s following his 90th percentile growth chart and has been exclusively breastfed up until now. But as he still wakes every two to three hours during the night needing a top up, it’s starting to take it’s toll (mainly on me!) He’s actually a good sleeper meaning that he never wants entertainment or any stimulation, other than food, in the night. He dream feeds and as soon as his need is fulfilled he’s straight back to snoozing soundly. But from my perspective getting more than a couple of hours sleep at a time would be very welcomed. 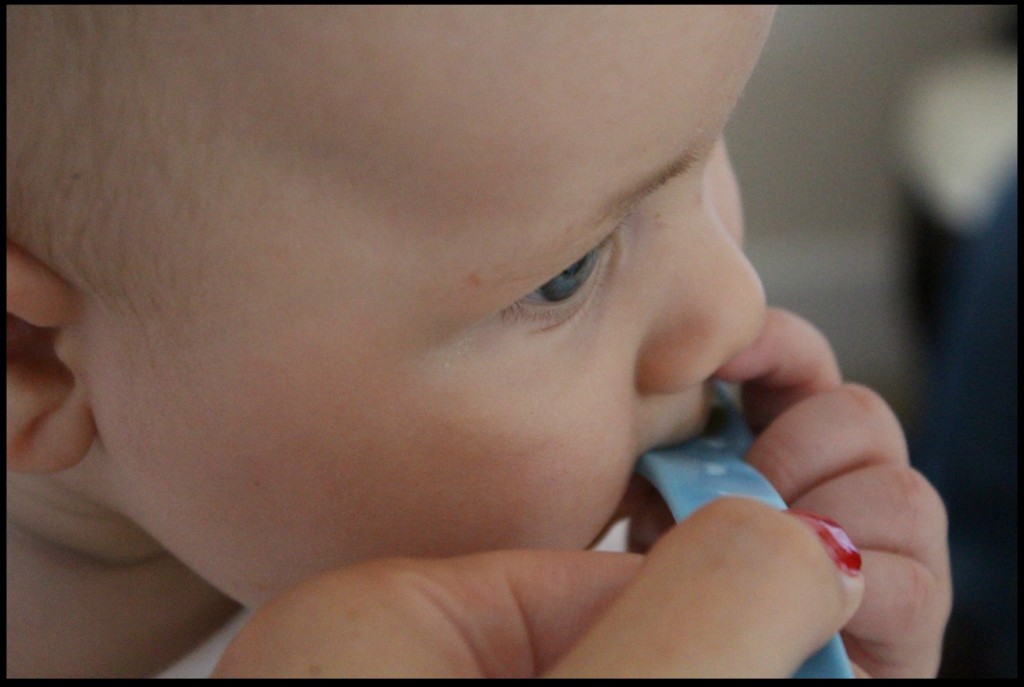 Several people have mentioned trying some baby rice before bedtime. By feeling fuller he might sleep for longer. There’s a lot of talk of not starting the weaning process until the baby’s six months old. These guidelines are good, but every child is different, and I do believe in trusting your mummy instinct and go with what feels right. And I suspected Caspian could do with a little extra here at four and half months.

We have had great results with the LATCH bottle, we were given to try by Munchkin at BritMums Live. If you follow the blog you’ll know about the struggles we’ve experienced getting Caspian to accept expressed breast milk. But now it looks like things are getting better thanks to the unique accordion teat on the LATCH bottle that stretches, moves and pumps like a real breast.

Another reason Caspian has refused the bottle seems to be down to the flow. I have quite a heavy let down so Caspian’s been used to food being served at a rapid pace – like the speed of Dustin Brown’s serve, the guy who just beat Rafael Nadal at Wimbledon’s Centre Court today! But this is not something we’ve thought about in relation to the bottle when we didn’t experience much success starting out. Most standard bottles come with a slow flowing teat, a number 1. But after speaking with the lovely Sarah Beeson (MBE) and telling her about the issue, she suggested trying a fast flowing one, a number 3, normally recommended for six months plus, to match my milk. This seems to work wonders. Sarah and her daughter, Amy, have just released their book Happy Baby, Happy Family, and I can’t recommend it enough. It even comes in an audio version if you’re struggling to find time to sit down and read while attending to a new baby. Sarah has more than 40 years experience working as a nurse and health care visitor and her expertise combined with her relaxed approach to parenting means her advice is so useful to new parents, but never comes across as patronising.

With all the struggles of getting Caspian to try the bottle I didn’t exactly have high hopes for him taking to weaning easily. We had spotted though that he’d become increasingly interested in us eating which, of course, could be a good sign. And he definitely put my worries to shame. My little boy almost grabbed the weaning spoon out of my hand. He is yet to refuse or spit out anything and so far he’s gobbled down baby rice plus purees of sweet potato, blue berries, bananas, apples, carrots and parsnips courtesy of the great organic range from Ella’s Kitchen. No stopping him now! And as food lovers ourselves it’s been a joy to see how he’s taken to this so well already.

How many adults does it take to feed a baby for the first time? Three, one to hold, one to feed, and the mummy blogger to take the picture

I’m yet to see any real result when it comes to his night time routine and sleep pattern, but with the current heat wave it seems none of us are sleeping through. In terms of his new teeth, I must say that those tiny tines are as sharp as razor blades, so I’m on a bit of mission to make sure Caspian doesn’t get into the habit of biting down when feeding. So far I’ve had to tell him NO! a couple of times, but this has only resulted in a cheeky grin appearing on his face. Clearly there’s some work to be done there or he might lose his milk supply. 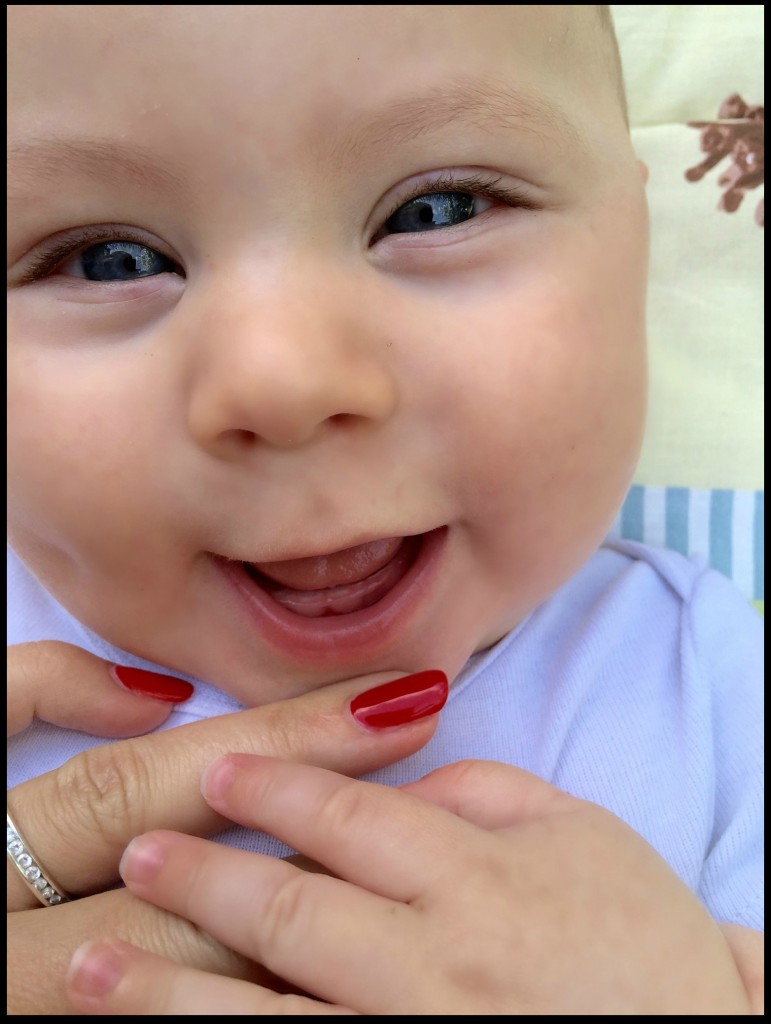 All these firsts are joyful though. The pain of the teeth coming through seems to have eased a little for him. The fact that he’ll now take a bottle and some food means Daddy Long Legs can relax more when he has him on his own, as he can supply the goods when hunger strikes. And Caspian’s new found acrobatic skills mean we’ll have to keep an extra careful eye on him, but like any new parent we are slightly obsessed and observing him is naturally our second favorite form of entertainment.

Have you experienced any firsts with your child recently?

5 thoughts on “TEETH, TEATS AND WEANING”